GISDP welcomes Mahima Hazarika as the Global Coordinator of its operations on youth mobilization for sustainability.

India’s North East and its role in the global discourse of Sustainability: A systemic perspective

Together, the eight NorthEast states of India share over 2000 kms of border with Bhutan, China, Myanmar and Bangladesh and are connected to the rest of India only by a narrow 20 kms wide corridor of land in Siliguri. The biodiversity significance of North East India under the Forest conservation program of WWF, India states that:

“The Northeast region of India comprising of the states of Arunachal Pradesh, Assam, Meghalaya, Manipur, Tripura, Mizoram, Nagaland and Sikkim can be physio-graphically categorized into the Eastern Himalayas, Northeast hills (Patkai-Naga Hills and Lushai Hills) and the Brahmaputra and Barak Valley plains. At the confluence of the Indo-Malayan, Indo-Chinese and Indian bio-geographical realms, the North Eastern region displays a bewildering diversity of language, ethnicity, culture, livelihood and environment and is unique in providing a profusion of habitats which features diverse biota with a high level of endemism. The region is also the abode of approximately 225 tribes in India, out of 450 in the country, the culture and customs of which have an important role in understanding biodiversity conservation and management issues.”

The NorthEastern region has been in focus for its high biodiversity and this region has been a priority for leading conservation agencies of the world. Moreover, while WWF has identified the entire Eastern Himalayas as a priority Global 200 Eco-region, The Critical Ecosystem Partnership Fund (CEPF) which is a joint initiative of Conservation International, the Global Environment Facility, the Government of Japan, the John D. and Catherine T. MacArthur Foundation and the World Bank has up-scaled the Eastern Himalaya Hotspot which initially covered the states of Arunachal Pradesh, Sikkim, Darjeeling Hills, Bhutan, and Southern China to the Indo Burma Hotspot (Myers et al., Biodiversity ‘hotspots’ for conservation opportunities, Nature, Vol. 403, pp. 853-858, 2000) which now includes all the eight states of North-East India, along with the neighboring countries of Bhutan, southern China and Myanmar. 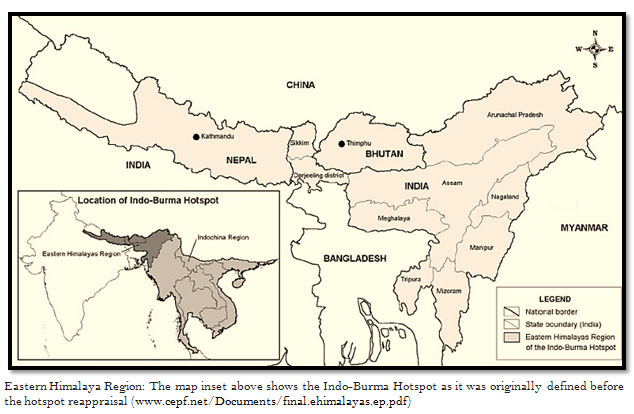 North East India as a location of extreme vulnerability and significance for the global discourse of Sustainability cannot be overemphasized. This sprawling region is conspicuous by verdant hilly terrains of Eastern Himalayas, scenic natural beauty, hospitable people with enduring expression in art and culture, quaint historic and Vedic shrines, and habitats of endangered species and habitat. However, it is unfortunate that inspite of its abysmal wealth of resources, the region earned a reputation more from conflict, insurgency, infrastructural and democratic deficit rather than its unique bio-cultural archive.

Those of us who work on this region are often grappled by questions such as:

While it is necessary to expose NorthEast India to global discourses, initiatives and experiences of models adopted and implemented in other similar regions of the world, it is also equally vital to allow the outside world a glimpse into the historical and traditional nature of sustainable living in NorthEast India through indigenous knowledge, local resource management and distribution, community assets, etc. A systemic analysis of Sustainability in North East India will have to understand the dynamics of conflict by connecting the interdependence of relationships between parts that regularly interact among themselves, such as evaluating the education system by focusing on revival of traditional knowledge base and indigenous technology with good governance through local participation in evolving an eco-system management plan or  devising a business solution founded  on  capital resources that are locally harnessed for utilization of  economic growth and human development. Central to this perspective is the recognition that the structure of any system—the many interlocking, sometimes time-delayed, sometimes circular interrelationships among its components—is often just as important, if not more important, than the individual components themselves in determining the system’s behavior.